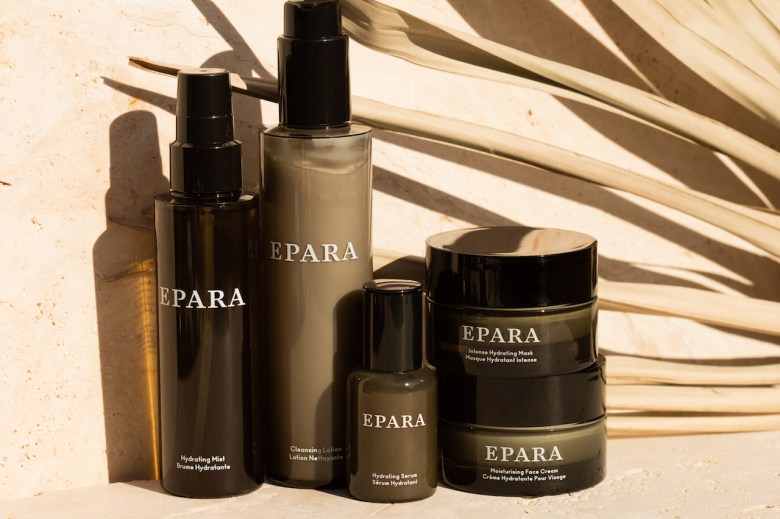 When Ozohu Adoh founded her skin-care brand Epara in 2017, her retail strategy was focused on wholesale distribution to the world’s top department stores. That plan came to fruition when she launched in Harrods that year. In 2018, she became the first Black beauty founder to land in Barneys.

“We thought that it was a strategic move. It was really important that we placed the brand in a place as elevated as Harrods,” she said.

Now, her brand can be found across a wide range of newer luxury partners including Net-a-Porter and Saks Fifth Avenue. Epara has launched in 10 new retailers since the launch of the 15 Percent Pledge this past summer. During Black History Month, Black-owned beauty brands are being highlighted by luxury retailers, as the industry reflects on the changes of the past nine months and what still needs to be done.

“When I first started this brand, I was very confident and clear that I was creating a brand for women of color,” said Adoh of Epara, which sells face and body products ranging from $49-$168.

“I felt that this segment of the market had been so neglected for so long, and therefore I needed to really make a statement about it,” she said. “Imagine taking that to the gatekeepers of the most luxurious stores in the world.” The retailers she initially spoke to “were not all receptive” to a luxury brand with a focus on women of color. “Today, I still give kudos to the buyer at Harrods and at Barneys for giving me a chance when nobody did. I was basically giving them an unorthodox proposition.”

Retailers have been upping their rosters of Black-owned luxury beauty brands over the past several months, as a result of the push for industry inclusivity tied to the Black Lives Matter movement. Many have joined the 15 Percent Pledge. Sephora, Macy’s, Bloomingdale’s and BlueMercury are listed as official signatories on the 15 Percent Pledge campaign site, while others including Violet Grey and Heyday have said they will join the pledge. This week, Sephora also announced eight BIPOC-founded brands as part of its 2021 Accelerate program. These include premium Black-owned labels such as 54 Thrones and Imania Beauty.

The timing is especially relevant, given Black History Month. After adding a tab for Black-owned brands to its menu bar in July 2020, luxury beauty retailer Knockout Beauty sent out a Black History Month email this month promoting the brands to its mailing list, and Knockout Beauty founder Cayli Cavaco Reck is conducting a series of IG Live talks with the brands’ founders. Brands stocked include Epi.Logic, Rose MD, Hyper!, Yubi Beauty and Bossy Cosmetics. Nordstrom, meanwhile, has been showcasing Black fashion and beauty founders on its social media accounts, and it’s created in-store pop-ups for Black History Month. Nordstrom’s Black-owned brands section within the Inclusive Beauty Edit on its website features founder bios and brands such as skin-care label BeautyStat and fragrance brand Chris Collins.

BeautyStat’s cult $80 vitamin C serum has sold out in several Nordstrom physical locations, said founder Ron Robinson, a chemist and beauty industry veteran. The brand launched in 2019 with a focus on improving the efficacy of vitamin C formulations. With 70% of its sales from DTC and 30% from wholesale, the brand is stocked across multiple luxury beauty retailers and department stores including Violet Grey, Neiman Marcus, Bluemercury and Saks Fifth Avenue. Robinson has noticed increased interest from more retailers over the past nine months.

“In some cases, because of the 15 Percent Pledge or the Black Lives Matter movement, some of those retailers brought us in sooner than they were originally going to,” he said.

The rising number of Black-owned e-tailers has also helped to further brand discovery and showcase brands in the luxury segment. Sanctuaire, a wellness and self-care oriented luxury e-tailer, showcases BIPOC-founded fashion and beauty brands including Epara. It was founded in August 2020 by Courtney Arrington-Baldwin, who previously worked as a project engineer in the construction industry with a focus on luxury hospitality, and her husband Donnell Baldwin, the former deputy U.S. style editor for Mr Porter.

According to Arrington-Baldwin, the site was created to give BIPOC-founded beauty brands recognition that had been lacking in the industry. “For us, it’s not just luxury in price, but it’s also luxury in feel and experience. It’s not about just picking out expensive things; it’s about picking out things that form the experience of Sanctuaire, which is a safe haven, a sanctuary space.” She plans to use her hospitality and construction background to create a physical space for the brand post-pandemic.

Luxury body-care brand Gilded, which is sold on Thirteen Lune as well as via DTC, has also seen increased interest from retailers.

“We got a lot of exposure through the Black Lives Matter movement,” said Gilded founder Blair Armstrong. “Before the 15 Percent Pledge, it would be us reaching out to retailers. Now, it’s them reaching out to us, which is a great position.” She said that when she founded the brand in 2015, she “really did not anticipate” the level of demand from retailers. She’s been working on scaling the business as Covid-19 has slowed the supply chain for ingredients, including Italian-sourced marble that is used in the brand’s body brushes.

Brand founders note that the industry’s work toward progress needs to continue.

“It’s really important that our brands are considered, and mentioned outside of Black History Month and Black Lives Matter, and lists of Black-owned brands,” said Armstrong. “We want to be accepted and considered in the same articles or mentions as other luxury brands; we just happen to be Black-owned.”

“The whole investment space has a lot to do with relationships,” she said. “The people you circulate around — that’s where you make friends; that’s where you hear about deals; that’s where you hear about opportunities. It’s actually a little bit of extra work for them to say, ‘OK, I need to go and look for something that is slightly different, that is not within my comfort zone, that is not within my space’ — and it’s an effort. That’s been the real reason that underpins a lack of diversity within the VC funding circle.”

When it comes to retailers’ efforts to feature brands by a more diverse range of founders, “I think some retailers are better than others in terms of what they’ve done so far,” said Robinson. “We’ve seen some good movement and some positive change in some places, and in other places it’s still TBD. There’s a lot of good talk out there and then good intentions, but let’s see what happens in terms of delivering on that. Let’s see what happens at the one-year mark and get a report card.”