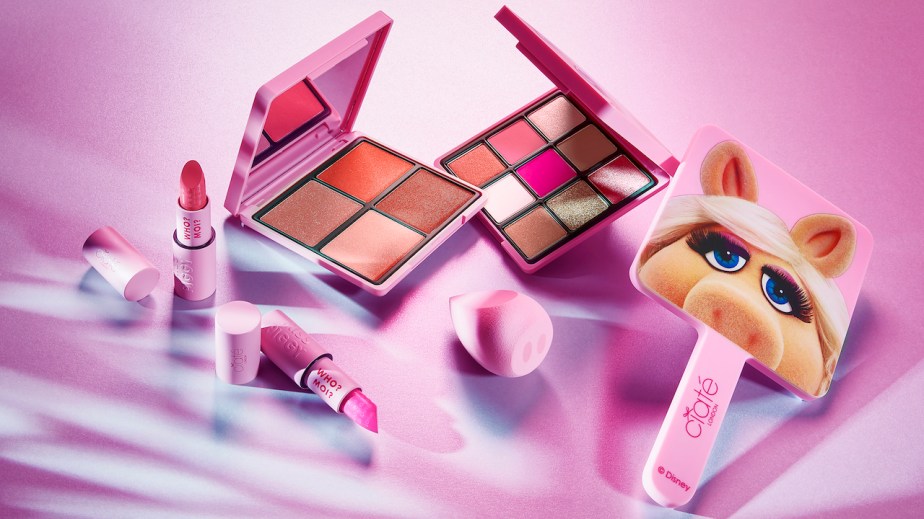 Ciaté London’s newest collab partner likes to show off her fabulous outfits, poolside poses and selfies on her verified Instagram account. But unlike your typical celebrity or influencer, she’s been a household name for 46 years: Miss Piggy.

Launched on the brand’s site and Sephora.com on October 15 and available until early 2021, Ciaté’s official collaboration with Miss Piggy and Muppets Studio features a palette, a lipstick, a makeup sponge, a mirror and a gift box featuring the glamorous Muppet’s face. The new collection is the second collaboration Ciaté has done with a Disney-owned character, and it represents a growing trend of cartoon and other fictional characters being used to help beauty brands stand out in an industry inundated with influencer collabs.

“Disney is a powerhouse of a brand, and for us, it definitely has a halo effect on brand awareness as a whole,” said Charlotte Knight, Ciaté founder and CEO. “We can target the Disney audience, the Muppets audience — these are whole new audiences that we would never have targeted before, because normally, we would target people who have a love and passion for makeup or shop in a certain shop.”

The brand teamed up with Miss Piggy following its first successful Disney collaboration, a Jessica Rabbit collection that sold out in three hours after it went live on Sephora.com in March 2019. It is not the only premium beauty brand to recently team up with Disney for a collaboration: Estée Lauder just launched its Disney Princess collaboration with a set of bedazzled compacts ranging from $150-$250. ColourPop saw its Shopify store crash thanks to the popularity of its “Hocus Pocus” collaboration on October 1 for Halloween; it is planning to release a Baby Yoda palette on October 29. Insert Name Here, meanwhile, teamed up with Disney for princess wigs for Halloween.

Disney has been an active collaborator with both fashion and beauty brands in recent years, working with both established and up-and-coming, trendy companies. ColourPop has teamed up with Disney for a wide range of collaborations, including Mulan, Frozen II, Disney villains and more. Other brands that have worked on Disney character or movie collaborations since 2016 include MAC Cosmetics, Urban Decay, SK-II, Revolution, Dose of Colors and Spectrum. Disney partners include beauty labels across the world, including many K-beauty brands like Etude House, Innisfree and The Face Shop.

Disney has also tapped into the beauty influencer world. “Since the start of 2019, Disney has collaborated with numerous beauty influencers on YouTube for tie-ins with certain characters or movie releases,” said Neil Patil, the chief commercial officer at Tubular Labs. He noted that one of the most popular examples was a “Maleficent” makeup tutorial for Halloween last year by beauty influencer Promise Phan, which received over 467,000 views.

Beauty brands launching these collaborations can reach an avid Disney fan base, which includes affluent adults willing to pay a premium for merch. The most die-hard fans are buying the products as collector’s items.

“We’re quite excited about how broad this demographic actually is,” said Knight, who noted that the target age demographic ranges from millennials who grew up watching “Sesame Street” to “Gen X and baby boomers who are nostalgically remembering the Miss Piggy that hit the screen 40 years ago.”

It’s not just Disney-owned cartoons that are generating buzz for beauty brands, as anime, comic and other loved cartoon characters are popping up on products. ColourPop, for instance, is known for its popular “Sailor Moon” collaboration. MAC also collaborates with cartoon brands beyond Disney, including “The Simpsons” (in 2014, before Disney’s Fox acquisition) and Hello Kitty. Shu Uemura has done collaborations with anime brands including “Pokemon” and “One Piece.” Revlon partnered with DC Comics’ “Wonder Woman” earlier this year, while Juno & Co. and HipDot have both done “SpongeBob SquarePants” collaborations.

But Covid-19 presents obstacles to these types of collaborations. The pre-pandemic planning for Miss Piggy had included large public installations in New York’s Times Square and London’s Covent Garden, a panel talk that was supposed to feature Miss Piggy, and video shoots with the star promoting the new collection. But unlike a human influencer, Miss Piggy can’t film the content by herself, from home.

“Around Miss Piggy is an entourage of a production team, as you would expect from such a diva,” said Knight. “It just wasn’t possible, and it was so upsetting, because we were all so excited.” She also noted that being on a set with the famous Muppet would have been a landmark moment in her career.

Instead, the brand is focusing for now on social media promotions and plans to hold the panel talk virtually with human participants. “If things start to improve in the world, then we definitely want to try and bring about some IRL activations to life,” said Knight.