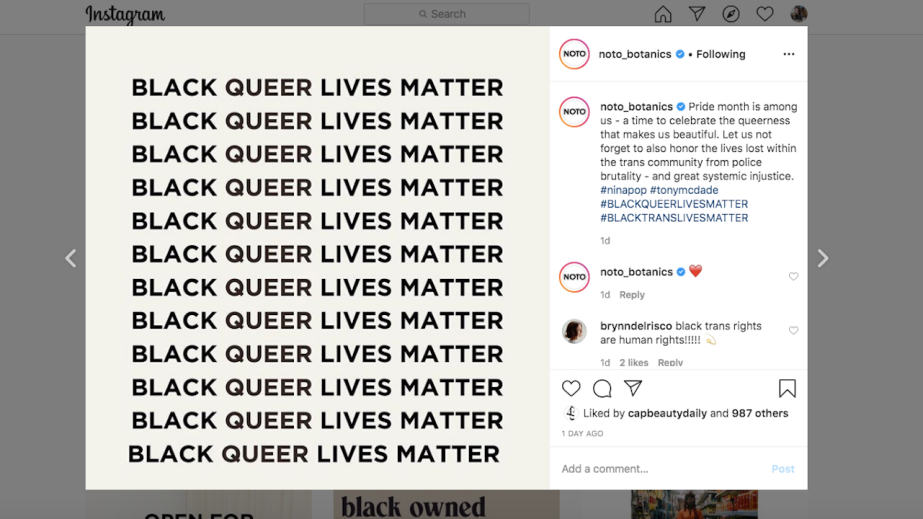 As the celebratory month for Pride, June emerged as a time for rainbow-filled campaigns in recent years. But in 2020, brands are taking a more subdued approach.

Beauty brands are delaying or reworking their Pride campaigns as the killing of George Floyd and global protests have re-focused conversations. New initiatives emphasize people of color and avoid characterizations of “pinkwashing” (capitalizing on LGBTQ+ support as a marketing tactic without helping the cause).

“Some of the interviews we had wanted to focus on [in marketing] were a combination of BIPOC individuals as well as white individuals,” said Gloria Noto, the founder of Noto Botanics, which describes itself as a gender-fluid, lesbian-owned clean beauty brand. “We connected with our white friends that we were planning on highlighting and just needed to tell them, ‘Actually, now’s not the time to amplify your voice. Right now is the time to focus on amplifying black voices within the gay community.’” Thus, Noto Botanics will be posting videos and livestreaming content featuring Black queer and trans creatives and activists.

Uoma Beauty also posted in support of Pride month, fielding some criticisms in Instagram comments that it should be focusing on Black Lives Matter only. To one commenter saying, “Now is not the time,” the brand responded, “It’s Pride month and celebrating Pride in ONE post does not take away from the movement for justice for our people.”

“As this whole conversation been shifting, it’s been really important to know that the origins of Pride are the celebration of the Stonewall riots, which were led by Black and brown trans people, and they were in reaction to over-policing of queer spaces,” said Matthew Herman, the co-founder of candle brand Boy Smells. The company’s Pride campaign, which features a special-edition set of candles with a portion of proceeds going to The Trevor Project, was pushed back five days from its original start date to June 10.

Brands that had launched or been planning to launch Pride initiatives before the protests began have also scaled back. Kiehl’s, for example, had planned on holding an online dance party on Instagram Live on June 5 along with its broader Pride initiative, but did not do so and has not posted Pride content on Instagram yet.

“While we wanted to celebrate Pride, we decided to take a step back out of respect for the Black Lives Matter movement. We paused all Pride messaging and activities until further notice,” said Tran Ngo, the senior director of e-commerce at Herbivore Botanicals.

Brands launching Pride initiatives are ensuring that they are providing tangible support to LGBTQ+ causes.

“To be perfectly honest, I am totally frustrated with the majority of companies who are jumping on this bandwagon of celebrating Pride as a capitalist game,” said Noto. “I feel that this year’s Pride is already way more authentic than last year’s Pride, as far as companies coming out, because they know they’re going to get called out a lot more easily.”

Megan Jones, a partner at January Digital, added, “Pride was already starting to kind of morph into a less commercial, really marketed activist stance for a lot of brands. I would say over the past three years, brands have started to realize that their role in activism might be more than a product launch or marketing campaign.”

In order to avoid being performative, “you have to give to the organization and ask them how you can help amplify their voice,” said Herman about charitable donations. “I don’t think that you should co-opt the voice of a movement if you don’t have the legitimacy to.”