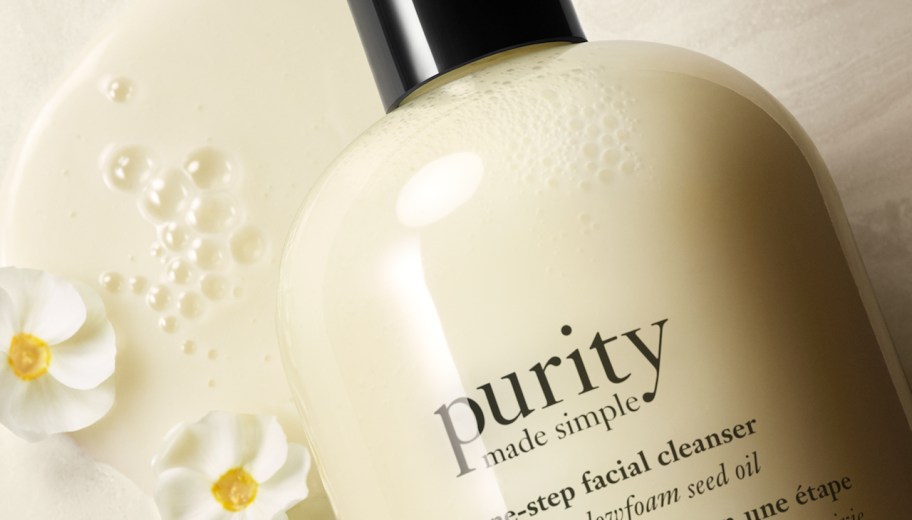 While beauty conglomerate Coty has been slowly building up its clean positioning since late last year — first with Sally Hansen’s clean nail polish line Good.Kind.Pure. in November and with Philosophy’s Nature in a Jar collection in December — it’s been through new franchises. Even Calvin Klein’s fragrance Everyone, an iteration of CK One that debuted this year and was considered cleaner in formulation (it includes 79% “natural origin” ingredients), was a new product.

However, Philosophy’s Purity cleanser re-launch in August demonstrated that big beauty can reformulate. Purity is arguably 24-year-old Philosophy’s most iconic franchise, and last month, the brand took the plunge to remove parabens from its one-step cleanser. Margot Humbert, Philosophy svp of global, would not share Purity’s sales, but said it is the No. 1 facial cleanser in the U.S.

“[Founder] Cristina Carlino’s founding principle for the brand was bringing superior scientific formulations to market, but she always wanted to emphasize the ideals of feeling well. She believed only when you feel good, that’s when you can look your best,” said Humbert.

While Philosophy’s 1996 positioning sounds like it was tailor-made for 2020, Humbert said the brand is working hard to make sure product — and subsequently content and online outreach — match today’s customer expectations. “We have an array of mediums like social and digital that didn’t really exist in 1996 to leverage this story; all Cristina really had was her product and her packaging,” she said. “We were called out because we had a lot of poetry and words on our packaging, but consumers said ‘This doesn’t tell me anything.'”

Simona Cattaneo, president of luxury brands at Coty, said, “Consumers today are more thoughtful about their skin-care purchases and want transparency when it comes to ingredients and the products they use. The removal of parabens from Philosophy’s iconic Purity cleanser was an important step in addressing consumers’ needs and the brand’s larger clean initiative, which will continue to play a role in new and existing franchises.”

By 2022, Philosophy is hoping to make the full transition to clean. By year end, it plans to remove parabens, formaldehydes, phthalates, hydroquinone and synthetic fragrances (greater than 1% ) from its its skin-care portfolio. And 2021 will include the phase out of sulfates (SLS and SLES), mineral oil, petrolatum and petroleum, among other ingredients. This type of staggered clean rollout will likely extend to sister brands of Philosophy, as new Coty CEO Sue Nabi said in August that she wants to focus on better products for the larger portfolio.

Other companies are working quickly to reformulate. Erno Lazslo CEO Charles Denton told me last year that the skin-care company was hard at work to make sure that its full product assortment would adhere to the Sephora Clean standard by the end of 2020. In Philosophy’s case, Purity launched at Ulta Beauty in August, and Humbert said it would likely be part of Ulta’s Conscious Beauty initiative that will launch in full in October.

Reformulation is tricky as the process takes an existing and, perhaps, beloved product and tweaks it. Customers may or may not appreciate a new version of a product, and some alienation could happen in an attempt to attract new shoppers. Cattaneo said in the case of Philosophy that Coty is “deeply committed to developing the best products while working to maintain the efficacy and textures synonymous with the brand.”

But the benefits might outweigh the risks, regardless. Brands get a second life at PR, thanks to reformulation efforts that are often covered heavily by media, influencers and retailers. According to Euromonitor International data, U.S. skin-care sales jumped from $16.1 billion in sales in 2014 to $21.1 billion in sales in 2019, but Philosophy’s rank within skin care dropped from 30th in 2014 to 35th in 2019.

The hard costs could also be considered negligible versus possibly missing the next big trend. Scott Kestenbaum, senior vice president at brand incubator and partner Maesa said, “R&D costs are effectively minimal.” He explained that if a beauty company was working with an outside lab, typically the outside lab or filler absorbs the cost fully.

The costs brands are responsible for include safety testing, such as preservative effectiveness or patch testing, or product claims testing, such as clinical trials. Depending upon product category or how aggressive the product is being marketed, testing costs can range from anywhere as low as $1,000 to $25,000 or greater.

If reformulation is done through an internal lab, the cost would likely remain the same, unless there was a new standard of testing on the formula (such as compatibility or stability).

The most sizable cost would be pulling all of the old formulas off a shelf and replacing them with a new product one at a time. Hard transition costs means a brand is responsible for returns from retailer, which could be significant; soft transition is effectively zero. However, when “Coty re-staged Covergirl a couple of years ago, they did a soft transition,” said Kestenbaum. Meaning, for a period of time, consumers saw both old and new product on the shelf at the same time in the same retailer. Coty would not detail the cost of reformulating Purity.

It’s a wonder why more traditional brands aren’t trying to scale their reformulation efforts, as a shopper would be hard pressed to find an indie brand launching today that wasn’t clean. But duplicating a clean point of view across a conglomerate’s products and markets will take time, especially since the E.U. has much stricter beauty standards than the U.S., for example.

Still, for Philosophy and Coty, clean remains its path forward. “Clean beauty has become more mainstream, and being at the forefront of innovation is part of Coty’s DNA,” said Cattaneo. “So naturally, we are also developing some clean options within the brands our customers love.”