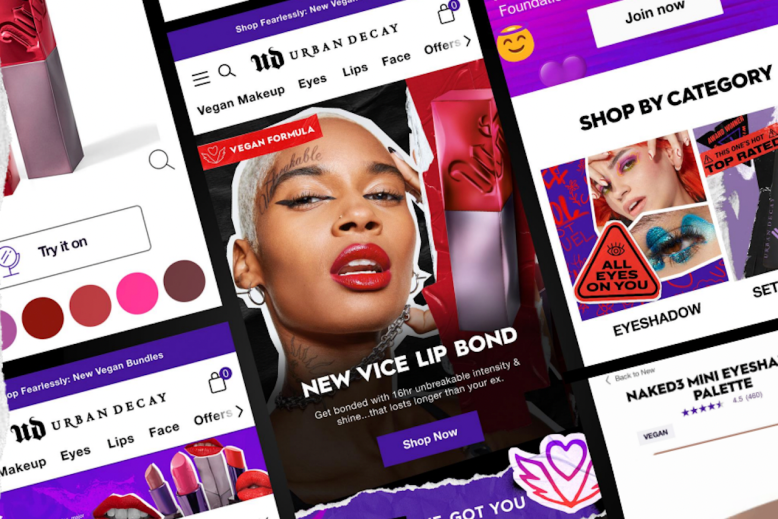 This week, I take a look at Urban Decay’s laser focus on digital. Scroll down to use Glossy+ Comments, giving the Glossy+ community the opportunity to join discussions around industry topics.

With DTC holdouts like Glossier finally pushing into retail, omnichannel has become the only strategy to win in beauty. And for players that have existing wholesale and digital strategies in place, fine-tuning those playbooks is an always-on need.

Case in point: L’Oréal-owned Urban Decay has been retooling its digital presence for more than a year, zeroing in on its e-commerce site, new and existing wholesale partners, and its social media gravitas in order to better capture Gen Z.

In July, the brand unveiled its relaunched e-commerce site that swapped out its dark and moody aesthetic for a more colorful and fun style, better in line with its desired customer base. New UrbanDecay.com features include Instagram-esque Stories highlights at the top of the homepage, alongside 3D product pages, supercharged virtual try-on experiences courtesy of ModiFace, and highlights of creator-led partnerships like its recent collaboration with breakout “Euphoria” actress Cherry Chloe. Last month, the brand also began testing a “TikTok Made Me Buy It” label across its site based on viral TikTok franchises, starting with its 24/7  Glide-On Eye Pencil, Vice Lip Bond lipstick and key category pages.

“The main performance driver continues to be a customer-centric frontend: web design, search and navigation, SEO, and of course, visual merchandising,” said Eva Erdmann, Urban Decay global brand president. “With this solid base, we’ve been able to iterate, test and innovate for shoppability and basket size. To date, we’ve seen significant engagement from our guided-selling quizzes, Instagram-like creator stories, ‘TikTok Made Me Buy It’ shopping option and 3D product page images that let visitors experience our packaging like they would in-store.”

With these tactics, Urban Decay has seen conversion on its site increase by 86% and its Gen-Z penetration increase by 16%. Pageviews also increased 62%, while its website bounce rate decreased by 10%. Additionally, the redesigning of Urban Decay’s taxonomy, navigation, as well as its category and product pages has led to increased rankings on nonbrand searches on Google. For example, Urban Decay, which is best known for its eye makeup, now owns “best eyeshadow palettes” on the search engine.

Yarden Horwitz, co-founder of Spate, said that in May 2021, the brand saw an exceptional month due to its UD x Prince collaboration. “UD had a big month, which didn’t last long, but it had an impact on year-over-year growth comparisons for 2022. If it weren’t for that spike, their year-over-year growth would be higher,” she said, noting that strong launches in the following months continued the brand’s online momentum.

Urban Decay’s interlinking of social with e-commerce is probably its best example of being where its customer is, as the site mimics the best parts of Instagram, Snapchat and TikTok in one setting. The virality of TikTok, especially, has caused many beauty products to see eye-popping sales, so the brand’s “TikTok Made Me Buy It” stamp of approval is likely more important than any beauty award listed alongside a product. In keeping with Gen-Z interests, the brand is also pushing further into gaming with Twitch, which kicked off last year via seeding young gamers, and its October holiday-themed AR game with illustrator Robin Eisenberg; it plans to launch in the metaverse later this month.

But Urban Decay isn’t attempting digital domination without its partners. While the brand still sells with Sephora and Ulta Beauty, in-store and online, it has rapidly expanded to pure-play e-commerce partners like Amazon, Tmall, Lookfantastic and Asos. Since launching on Amazon in 2020, it has spent the last two years optimizing on the platform through A+ content. It has grown one point in sales rankings across categories year-over-year; for example, in face, the brand is now ranked fourth versus fifth last year. Within Amazon U.S., Urban Decay is the third best-selling eye makeup brand, while in Europe, it is the third best-selling makeup line overall.

“Amazon brings a new scalable audience and the tools to recruit that audience. That’s where Amazon was also pivotal in how we approach our business: We had to think and work differently, being more data-driven than ever to capture their demand. And we did it. Since we launched Amazon in the U.S. and Europe, we’ve been growing twice as fast as the premium makeup market,” said Erdmann. “These marketplaces help us find and recruit new consumers at the right price point.”

The brand would not share sales figures but said it is targeting at least 50% of its total business to be via digital channels. In L’Oréal 2022 first-half results, Urban Decay was called out as it “grew significantly faster than the market, which continued to be dynamic.”

How specialty beauty retail came to dominate the mass channel

Sephora unveils plans for the U.K.