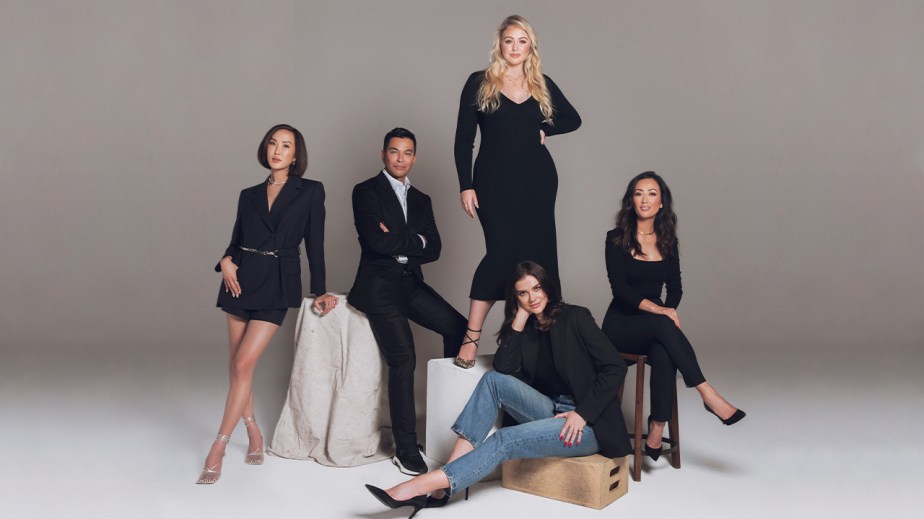 More than ever, companies are trying their hand at the beauty incubator model. This week, I do a deep dive on The Center, a company I’ve been following closely for about three years. – Priya Rao

And join the conversation! Scroll down to use Glossy+ Comments, giving the Glossy+ community the opportunity to discuss timely industry topics. Our editors and reporters are talking about this story now.

When The Center debuted in 2019, little was known about the brand incubator. In truth, it remains somewhat of a mystery even today. But it was Ben Bennett’s next act; Bennett had recently left HatchBeauty Brands, where he was co-founder and creative officer. Knowing that HatchBeauty was responsible for the behind-the-scenes magic of lines like Orlando Pita Play, I was eager to find out what The Center was all about.

Just as The Center was launching, incubators like SOS Beauty were becoming more forward facing and retailers like Target and QVC were making a go of creating their own owned brands alone. The private label beauty segment was becoming so very crowded. Flash forward three years and that crowding is even more pronounced as talent agencies like Creative Artists Agency (CAA) and United Talent Agency (UTA) hope to translate so many of their celebrities and influencers into brand founders. On a smaller scale, NBCUniversal has a partnership with Volition Beauty for its own network talent. Currently, beauty is deluged with celebrity-fronted beauty brands. And in calls with entrepreneurs and brands large and small, the word “incubator” is used more times than I can count.

“For The Center, I don’t know if I went into it with a defined plan, other than I knew that I wasn’t going to be building brands with myself as the founder or face,” Bennett told me in late August. Over the course of several days, I spent time with Bennett, and The Center’s four founders, Susan Yara, Carrie Barber, Chriselle Lim and Iskra Lawrence. Bennett calls the foursome the “sister wives.”

“I know that being a founder is not my role; my role is somebody who identifies whitespace and creates a highly commercial answer to fill that opportunity. I also know that my time with these properties that I build is limited,” he said.

To date, the focus of The Center has been finding that opportunity in beauty, creating the seeds of a brand and then attaching talent to serve as the brand’s founder. Together, Bennett and said founder own and operate that brand, with The Center team. At any given time, Bennett expects The Center will operate around five brands at a time.

Bennett wasn’t big on influencers or celebrities when he founded The Center; so much so that Yara, who co-owns Naturium, told me that Bennett said, “He would never do an influencer brand.”

But Naturium was the first brand to launch in The Center’s portfolio in 2019. Yara, a broadcast journalist-turned-influencer, joined the brand in 2020, after first coming to Bennett with another proposal for a beauty line. When Yara announced her involvement well after Naturium got off the ground, controversy ensued. Both Bennett and Yara acknowledged that they could have addressed her involvement earlier. Make Beauty, an acquired brand, followed in 2020, fronted by Barber. The portfolio is rounded out by Lawrence’s Saltair and Phlur, which Bennett purchased in January 2021; Lim is its founder. Bennett would not share sales figures, but industry sources say that The Center will hit $100 million in retail sales this year. Bennett confirmed that Naturium drives the majority of the company’s sales.

At a time, when industry insiders and beauty fans alike question what Brad Pitt actually does for his new skin-care line, Le Domaine, or how involved Scarlett Johannson is in her brand The Outset, it’s fair to be skeptical of influencers-turned-founders too. At this point, the line between celebrity and influencer is almost indistinguishable, see Kim Kardashian.

According to Bennett, the female founders are not just faces for their brands. They have equity stakes in their lines and none of them receive a salary. They are also not considered The Center’s employees; Barber is the exception who also works on art direction and campaigns across The Center. The Center has 35 employees.

“I look for business partners. Because they are personalities, who get paid by other brands to promote them, the assumption is that The Center is treating them like a celebrity or licensing them or sponsoring them,” said Bennett. “But that is not what we are doing. When we travel, I make everybody, including these women, fly economy. They stay at the Hilton Garden Inn or the Courtyard Marriott, just like the rest of us.”

To be a Center founder is work, which is not lost on Lawrence. “I’m focusing energy on something that we hope will turn into something,” she said. Lawrence was introduced to Bennett soon after being unceremoniously let go from her position at American Eagle, whom she worked with since 2014.

“It really did feel like the rug had been pulled out from under my feet. I was just falling. I’m trying to figure out motherhood, I’m trying to figure out living in this new pandemic state, social media is changing day by day and then my security, my safety net, my contract and my employer for the last seven years is just poof,” she said of her professional and personal state in 2020.

Lawrence said she had been approached with licensing deals for several other projects, she said she didn’t want to “slap her name on something.”

“Ben and I kind of dated [in a professional sense],” she said. “I trust that he’s making smart decisions about this brand and knows that I’m fully invested for the long term. He has to know that I will continue to show up, support this brand and do the behind-the-scenes work that it requires.”

Lim’s introduction to Bennett also occurred at a crossroads in her life. Better known as a fashion influencer, Lim was in the midst of leaving her marriage and adjusting to life as a single parent. Though she may not have appeared like an obvious choice for a fragrance founder, her personal story layered with a compelling scent was the recipe that Phlur’s first fragrance, Missing Person, needed.

“It took the world by storm, went viral on TikTok and it was all about the idea of filling a void,” said Lim. “For me, the hardest thing during my divorce was waking up and feeling like something’s missing. It was not necessarily that I was missing him. Missing Person had that warm feeling on the skin that made me feel less alone. It felt familiar; it felt nostalgic.”

The next launch, Lost Cause, emphasized a wanderlust, carefree sensibility, while Not Your Baby was meant to be playful and flirty. “It was sassy. It was around the time that I was realizing that I was single and that I was still attractive. I was married for eight-plus years and in a relationship for 15-plus years with this man, but I still got it,” she said.

That each scent had a specific personality helped underscore Phlur’s idea of a fragrance wardrobe, that aligns with Lim’s fashion background and also the way consumers are wearing fragrances today. For year one, many of Phlur’s fragrances captured a piece of Lim’s life; though that will change as the brand matures, she said.

Saltair, which is DTC-only for now, will launch haircare in October and debut in a major retailer in January. Phlur, a Sephora brand, is launching at Selfridge’s as we speak. While not an apples-to-apples comparison in terms of SKUs, both Saltair and Phlur, will match or beat the sales figures that Naturium had in year one. According to Beauty Independent, Naturium was pegged to earn $10 million in first-year sales.

Bennett is not precious about The Center owning these brands in perpetuity, calling himself “the birth parent,” not “the forever parent.” He also considers The Center a brand accelerator, not an incubator as that implies that The Center owns the brand, not the founder. In fact, he hopes that these brands can and will exit with a strategic buyer eventually. Though unconventional in the brand incubator space or virtually any celeb/influencer agreement, the strategy is working.

For proof: If one was wondering what a Center spinoff might look like, Naturium is the best case example.

“Ben was straightforward with me about his goal and what The Center could do. And I was very clear about building a legacy brand,” said Yara, who expected Naturium to grow within the company for three to five years before operating more independently. That has been accelerated, as Bennett has largely stepped away from day-to-day activities and Yara has spent the year building a robust beauty executive team. Francois Bonin, formerly of BH Cosmetics and Tatcha, joined in February as CEO, and Michael Kremer, previously at Pacifica and L’Oreal, started in April as CMO. According to multiple sources, it is expected that Naturium will be on the market in the next year.

Both Yara and Bennett agreed that while the latter can fast-track a brand like Naturium to $30-$50 million in sales, another skill set is required to generate $60-$100 million. Bennett said in essence, he prefers startup mode. Beauty Packaging reported that Naturium will make $50 million in revenue by year’s end.

What surprised me about the interactions between the “sister wives” over the course of two days was how noncompetitive they were with one another. While Naturium is the crown jewel of The Center’s portfolio for now, the other founders didn’t seem to mind that. In fact, Yara was seen almost like a wise elder. For instance, I watched Barber ask Yara for her tips on “getting ready with me” IG Reels. They also seem to understand that a possible Naturium sale would only provide further investment for The Center and its brands.

Right now, Barber, Lawrence and Lim are all hoping to learn as much as possible, so they too might be in the position that Yara is in now. “Three of us are mothers and people might forget that, but we want to have a legacy that supports our families,” said Lim.

As for Make, it is rounding out its assortment, the brand recently launched concealer; it will be focusing on its retail expansion in 2023. “I want Make to be a household name, just like Nars, but I’m absorbing as much as I can from Ben, Susan and the other founders. When Susan was talking about what she is good at and what she looked for in a CEO, it made me think more about what our path will look like,” said Barber.

Bennett certainly has his hands full, but he does have his eye on more categories – a full-fledged hair brand seems like an obvious next step – and more brands. Asked whether those brands will be influencer-facing brands, he said, “not necessarily.” “Influencers and celebrities are where beauty is now, but it’s a moment. It always changes.”

Glossy+ Research: How brands and retailers are actually using AR and VR

The male beauty rebellion in China