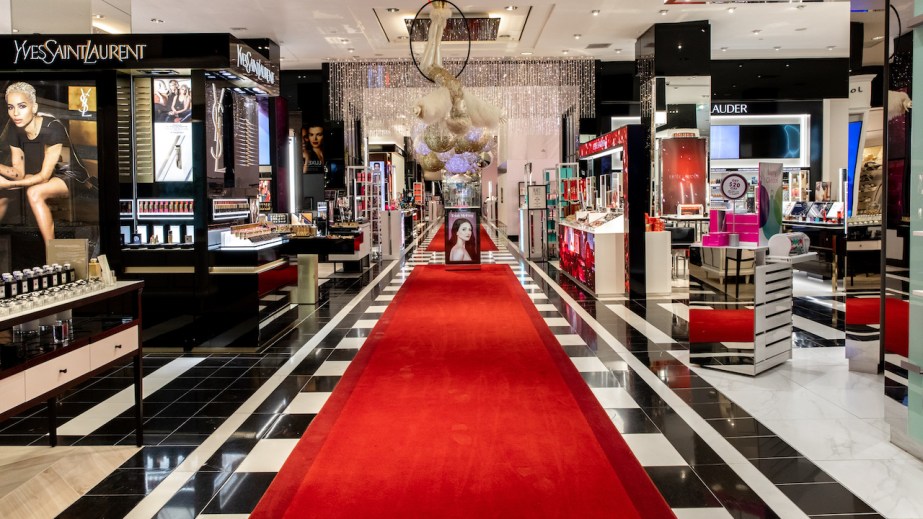 Beauty and the retailpocalypse: Are beauty sales buying time for department stores?

When it comes to retail during the Covid-19 pandemic, more beauty equals less pain.

Already facing a pre-pandemic “retailpocalypse” that had claimed Barney’s as a victim in 2019 and led to layoffs at Macy’s in 2020, U.S. retailers are fighting for survival en masse. Many had been striving to carve out (or win back) a share of the beauty market largely owned by e-commerce players and multi-brand retailers like Sephora and Ulta. Now, beauty has become especially crucial, as people are buying more face cream than fashion.

According to retail performance data platform Skypad, which tracks retailers including department stores, fashion sales dropped by 42% from March 22 to 29. This was a larger plunge than cosmetics, which declined by 32% during the same time period.

“Beauty is hurting a little bit less than fashion,” said Skypad CEO Jay Hakami. Based on what the company has been seeing in weekly data, it estimates that the year-over-year decline for April 2020 will remain in the range of 40% for fashion and 30% for cosmetics.

E-commerce company Verishop, which launched in 2019 and sells fashion, beauty and home products, is faring better than beleaguered department stores. The company has seen a month-over-month 102% sales increase in beauty, and a decrease of 16% and 17% in women’s and men’s fashion, respectively, for the weeks of February 20–26 and March 19–25. According to Verishop co-founder and CEO Imran Khan, beauty made up around 10% of the company’s sales before the Covid-19 shutdowns hit, but it now accounts for 30%.

“We always have ups and downs in categories, but you want to have a diversified business,” said Verishop co-founder and CEO Imran Khan. Thanks to the continued strength of beauty, the company’s order volume increased 50% month-over-month in March and April. The brand’s Instagram account is mainly focused on posts about beauty and home goods, as of Tuesday.

“Out of this crisis, we will see an acceleration of the trends we saw going into the recession. We’re probably going to see faster landscape changes for companies and the [falloff] of trends that were struggling going into the recession,” said Khan. He said, earlier this year, the company had already seen increasing popularity of skin care, which is now a top-performing category overall for the company.

“Beauty has been trending above the performance of apparel, footwear and accessories,” said Larissa Jensen, NPD Group vice president and beauty industry advisor. The research firm, which tracks retailers including department stores and national chains like Bloomingdale’s, Macy’s, Ulta and Sephora, found that beauty sales declined by 14% year-over-year in the first quarter of 2020. The overall decline began in March as a result of store shutdowns, as sales had grown by 3% for January and February.

Sarah Brown, the founder of Pai Skincare, a clean beauty brand sold at Bloomingdale’s, confirmed that: “Certainly our Bloomingdale’s online sales are up,” she said. She said that beauty sales online are making up for “some of the deficits” caused by the shutdown. According to her, the pure-play beauty sites have been the strongest sales channels during the shutdown.

Anna Teal, CEO of skin-care and body brand Aromatherapy Associates, said the brand is seeing a 233% year-over-year sales spike on its own website. She also said that specialty beauty retailers are performing better than department store sales, “because they are responsive and know how to repurpose their marketing. They have the infrastructure ready to go faster and harder.”

When looking at discretionary spending on non-necessities, “beauty is one of the more essential of the categories,” said Jensen. “I don’t know how many people still really need to purchase footwear, over and above what they already own in their closets right now.”

Beauty is also an area where department stores have lost out in the past decade, despite their previous positioning as the main go-to destination for premium beauty products. They have ceded ground to Sephora and Ulta, especially missing out on beauty’s e-commerce boom. Between 2013 and 2019, department store beauty and personal care sales grew by 6%, a growth rate dwarfed by a 150% increase in total online sales for the category during the same time period, according to Euromonitor.

Specialty retailers have also been increasingly diversifying into beauty in recent years. These include Forever 21, labels under the Urban Outfitters umbrella including Urban Outfitters, Free People and Anthropologie, and J.Crew’s Madewell. In Urban Outfitters’ third-quarter earnings call in November 2019, CEO Richard Hayne called out beauty as a category that was performing well in comparison to fashion. But these retailers are a mixed bag for beauty brands during the shutdown.

Department stores’ efforts to win back beauty market share have included embracing buzzy emerging brands and launching new digital initiatives. Kohl’s launched its Beauty Checkout program to highlight emerging brands in partnership with Facebook in October 2019. But department stores have also invested heavily in now-unavailable physical store experiences. Nordstrom teamed up with Glossier for a pop-up in December 2019, but does not sell the popular DTC brand on its site. The department store’s new NYC flagship, which opened in October 2019, includes a two-level beauty department offering in-store services like Botox and other facial treatments. Saks Fifth Avenue and Bloomingdale’s have also revamped their beauty departments with service-heavy offerings in recent years.

It is clear from recent news that beauty alone will not save department stores.

For retailers that “entered this already in a precarious position — and this could be department stores; it could be any kind of retail environment out there — it’s going to be challenging to see how those come out on the other side,” said Jensen.

Macy’s revamped its store and e-commerce beauty experience in 2018. It had previously acquired luxury beauty and spa chain Bluemercury in 2015, but reportedly put it up for sale this month. Already struggling before the shutdowns, the department store chain announced in a press release on March 30 that it had “lost the majority” of its sales as a result of the pandemic, despite keeping digital channels open.

J.C. Penney, meanwhile, had adapted to the multi-brand beauty boom by leasing store spaces out to Sephora and selling through a Sephora beauty channel on its site. The department store is reportedly in “advanced talks” for bankruptcy filing.

“It’s getting a bit touchy, and some retailers, unfortunately, will probably not make it,” said Hakami.