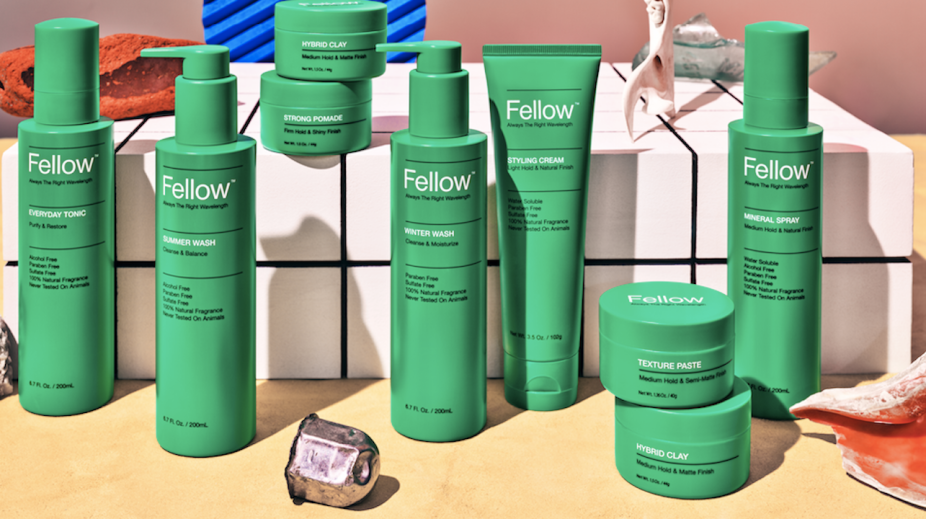 Barbershops are launching products and positioning barbers as influencers

The men’s grooming category continues to evolve with the help of the classic barbershop.

On Monday, 12-year-old salon Fellow Barber is shifting further from being purely a service business to selling product, with an assortment of nine hair products. They include Summer and Winter washes (Fellow Barber’s take on shampoos) to a Mineral Spray, inspired by a women’s salt spray — 15% of Fellow Barber’s clients are women or those who identify as non-binary. The products range from $25 to $30 and will be available at Fellow Barber’s 11 barbershops in New York and California and on its site, as well as at 500 other retail store locations and sites over the course of the next year, including Mr. Porter, The Conservatory and Blackstones salons.

“What we have found in our salons are the products that both the men in our shops are gravitating toward and what our barbers know and like to use, and that has given us a more thoughtful approach to what we wanted to create,” said Sam Buffa, Fellow Barber founder. “One of the biggest things our barbers saw were that men were overwashing and overconditioning their hair, and though women now understand not to wash their hair every day, men are just starting to realize that.”

Buffa noted that across the company’s 120 barbers, Fellow Barber conducts upward of 20,000 haircuts a month. Thus, Fellow Barber is leaning on its staff, much like stylists in the women’s professional salon network, to provide education in stores and on social media versus working with paid influencers. At launch, the company is also not pulling the paid ad lever on Facebook, Instagram and Google.

Fellow Barber sells an assortment of men’s products from 30 other brands, including D.S. & Durga, MCMC and Babe of Brooklyn, which it will continue to do. Its own smaller edit of products, which debuted in 2014 and accounted for approximately 15% of overall sales, has slowly been phased out in favor of this bigger push — that line was in just about 100 locations. Buffa said he expects the new launches to account for around $3 million in sales and hopes it will eventually represent 50% of the larger pie.

Fellow Barber’s foray into product is timely. The men’s grooming market continues to accelerate as men become more interested in their personal-care routines, said Dalton Dorné, CMO of digital marketing agency Tinuiti. “Trends show that increasing beauty consciousness among men is opening up new opportunities for beauty brands. Everything from hair care to skin care and beyond is now on the table for men,” she said.

Tinuiti’s latest research found that men actually purchase beauty products more frequently than women, with 3.9% of men saying they purchase products at least once a week, compared to 2.7% of women. That number is even higher for Gen Z males, at 4.6% versus 1.5% for females. In step with that, Orbis Research found that the overall men’s market is expected to grow by nearly 9% to approximately $118 million in 2025.

For now, Fellow Barber is not looking toward more traditional, national distribution partners as of yet, such as Amazon, Walmart and Target, though the latter has been bullish about onboarding buzzy men’s brands like Rebel’s Refinery, Harry’s and Bevel. It even expanded its private-label Goodfellow and Co fashion line into grooming in May to grab a piece of the growing men’s pie.

U.K. barbershop Johnny’s Chop Shop’s approach to products is decidedly different from Fellow Barber’s. To establish its U.S. presence in 2019, the 4-year-old British outpost opened its first shop in Williamsburg on July 12. It will roll out its product line to a select grouping of CVS stores through a trial program this week and to 1,000 Walgreen stores in mid-August. In March, it landed in 3,500 Walmart locations. Johnny’s Chop Shop is already found in 21 other countries and is the No. 5 ranked brand in the men’s hair-care category at Boots U.K. Founder Steven Ross expects the U.S. to account for 50% of their sales in a year, thanks largely to product sales. Its line is more mass-market priced and retails from around $7 to $10. By the end of the year, Ross projects Johnny’s Chop Shop’s global retail value will be more than $12.5 million.

Though Dorné said men are increasingly turning to online channels, like Amazon, to take advantage of low prices, free shipping and convenience as they think about beauty and grooming, e-commerce is an evolving strategy for both Fellow Barber and Johnny’s Chop Shop.

“Online is still a relatively small part of our business. We are focused on the education of using and selling better products, and that starts with our barbers,” said Buffa, who noted that his staff members have the same appeal as an influencer, but with better word-of-mouth authenticity. “To teach men how to wash their hair or care for their beard or buy a premium-priced product starts with that one-on-one connection.”