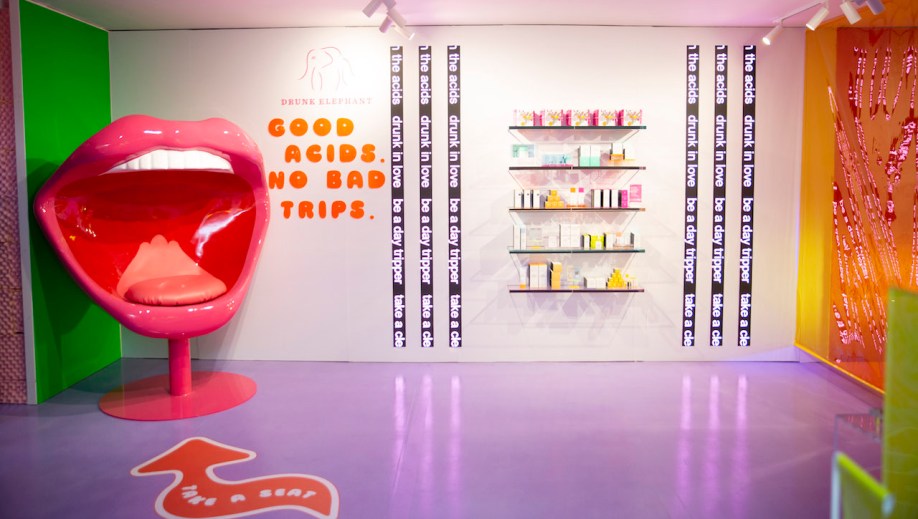 After stints in the London in October 2018 and Singapore in November 2018 — both were tied to launching in the U.K. and Asia, via Space NK and Cult Beauty for the former and Sephora for the latter — Drunk Elephant’s “House of Drunk” opening this month is the brand’s first retail experiment in the U.S. Outside of the “House of Drunk” NY activation, Drunk Elephant can only be found at DrunkElephant.com and exclusively with Sephora.

The 1,300-square-foot space, which opens to the public June 14 after a series of private events starting with a launch on June 10, has an “Acid Trip” theme via neon displays. It’s intended to not just be a point of sale for the brand, but to offer immersive experiential touch points for visitors. For example, there’s a smoothie activation station, with customized offerings based on a shopper’s skin-care needs.

“I’ve been wanting to bring the pop-up to the U.S. We’ve used it for our [other] launches, and it really feels like you are stepping into the brand; it’s a chance for people to experience Drunk Elephant like they never have before. It’s one thing to see it on social media, but this pop-up is quite another,” said Drunk Elephant founder Tiffany Masterson.

Drunk Elephant’s foray into U.S. retail follows what has been a buzzy several months for the brand. Industry experts estimate that the company wrapped 2018 with $150 million in sales, and in January, it began working with investment banks Financo and Moelis & Co. to explore a possible sale. The Wall Street Journal reported that a possible sale could bring in upward of $1 billion, and Unilever is said to be the latest beauty conglomerate circling.

At the New York edition of “House of Drunk,” all of the brand’s 20 beauty products will be sold; attendees will also preview its new Lala Retro Whipped Cream with Ceramides product that hits shelves in July. Drunk Elephant’s Drunk Life line of baseball caps, T-shirts, sweatshirts and accessories will also be available for purchase, as the store is meant to capture the brand’s overall lifestyle aesthetic. Previously, those items were only sold on the brand’s e-commerce site.

At the London iteration of the pop-up, products were also for sale. Masterson would not detail sales figure, only stating “it did very well” and “had a line around the block.” According to Tribe Dynamics data, Drunk Elephant saw 579% earned media [EMV] growth year over year in the U.K., largely due to the pop-up. In the fourth quarter of 2018, when the pop-up began, Drunk Elephant amassed $2.5 million EMV, up 404% quarter on quarter. Around 230 influencers in the U.K. mentioned the brand, compared to 186 the quarter prior.

Programming will be an additional and new element of the New York franchise. Interestingly, Sephora is co-hosting a VIB Rouge night on June 12 with Drunk Elephant at the pop-up. VIB Rouge members of Sephora’s Beauty Insider rewards program are those that spend at least $350 a year. Select VIB Rouge clients will have one-on-one time with Masterson at the event and will be able to redeem their Beauty Insider points to attend.

“It’s our first time to co-host a pop-up with Sephora. VIB Rouge clients will have the opportunity to access our brand in a more intimate way, spending time with our team and getting immersed in all that is Drunk Elephant,” said Masterson. “It’s a time for me to get to know them and for them to ask questions and share feedback, too.”

That Sephora is co-hosting the event with Drunk Elephant suggests that the beauty retailer does not feel competitive about the brand’s moves into other selling environments in the U.S. Sephora was not available for comment but stated it has done other co-branded activations with other beauty brands. Additionally, on June 11, Masterson will host a private, community-focused panel discussion for VIPs featuring Dr. Frank Lipman, Man Repeller’s Leandra Medine, actress Jenny Mollen and others to drive the conversation around Drunk Elephant’s holistic ethos.

Drunk Elephant is planning a “House of Drunk” moment in Los Angeles in the fall, as well as another international experience. Though Masterson did not state which country or region it will be in, she did say it was a new market for the brand.

“We are pushing the brand’s philosophy of clean and compatible, and educating on how to listen to your skin and customize your own skin-care routine,” said Masterson. “Our goal is to increase awareness of our philosophy, and that is success to us.”