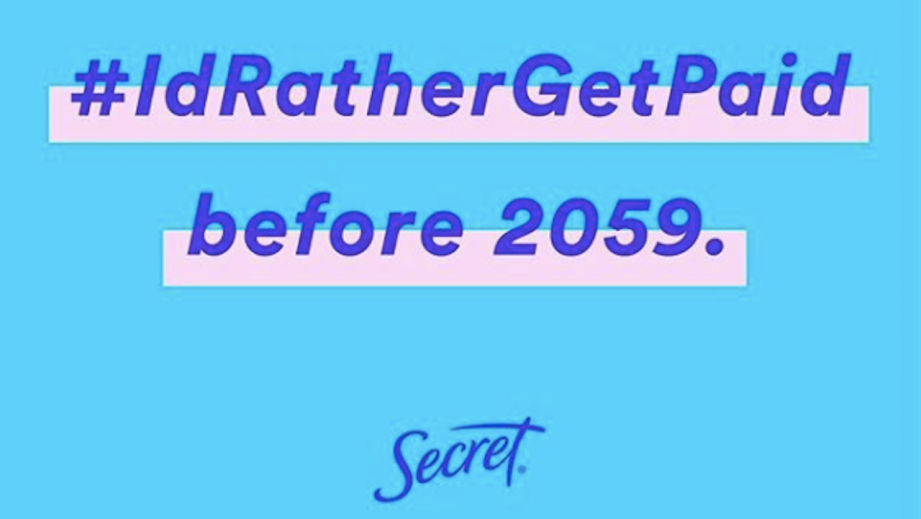 Secret goes after millennial women by aligning with wage inequality

Secret is trying to lure millennial customers with its first-ever digital-only marketing campaign that pushes the wage-inequality conversation.

This week, the Procter & Gamble-owned deodorant brand debuted its “I’d Rather Get Paid” campaign that features a mix of 19 celebrities and influencers who have been outspoken on the topic, like Catt Sadler, who left E! because of a significant pay disparity; fashion bloggers Caillianne Beckerman and Samantha Beckerman; and Ladies Get Paid co-founders Claire Wasserman and Ashley Louise.

“It is really important for the brand to understand what is stressing women, and pay is absolutely on their minds,” said Secret associate brand director Sara Saunders, who pointed to the statistic that women in the U.S. are paid 20 percent less than their male counterparts, according to The American Association of University Women’s latest report (which adds up to $513 billion in lost wages each year). “We had aligned ourselves with a cause our customers care about,” she added.

Though Secret boasts it is the No.1 women’s deodorant brand in the U.S., for six months the company conducted qualitative focus groups with existing and potential customers around stress and sweat. The results drove the “I’d Rather Get Paid” campaign, which is targeted at female college graduates entering the workforce for the first time.

“It’s an important group, those 22-year-olds that are making their first deodorant purchase for themselves,” said Saunders. Secret noted that prior to that age mothers are the ones making buying decisions around deodorant (currently, Secret’s reaches a wide demographic of 18- to 54-year-olds).

While the deodorant category continues to grow — over 22 percent during the 2012 to 2017 time period, according to market research firm Euromonitor International — Secret is facing increasing competition from organic and natural brands like Unilever’s Schmidt’s. According to The Benchmarking Company’s 2018 Pink Report, 70 percent of millennials are particularly interested and purchase some natural and organic products.

Secret has tried to tie itself with women’s issues in the past, most notably with its “Stress Tested for Women” campaign in 2016, though that was a television-only spot. Beauty and personal-care companies have long tried to align themselves with political and social causes, like MAC Cosmetics, which has been supporting AIDS and HIV research since 1994. but Saunders explains the push to be digital-first for Secret was a conscious choice. “Millennial customers are shopping and researching online first,” she said. “That’s where they are.” Furthermore, Saunders explained the financial investment in its latest activation was “significantly less” compared to its 2016 television campaign (and that is with paying 19 celebrities and influencers).

Secret, which was called out for driving mid-single-digit growth for Procter & Gamble in the first quarter of 2019, features its Outlast collection (a bestseller from the brand, but a 2012 launch) in the campaign, so the new marketing is not necessarily about selling the latest products, added Nicole Draznik, Secret senior communications manager.

To prep for the campaign, Secret swiped its Instagram in mid-October, where it has nearly 20,000 followers, to tease wage-related content using the hashtag #IdRatherGetPaid. Draznik said the social media platform will be the de facto marketing platform of choice as the brand updates its messaging strategy over the next 12 months. On YouTube, where the video campaign was first released, Secret garnered 1.5 million views in one day (the brand only has 31,000 followers on the platform).

Secret has also partnered with career and salary network Ladies Get Paid in a content and experiential capacity. The two companies have collaborated on an educational toolkit that outlines strategies for salary negotiation on LadiesGetPaid.com. Additionally, Wasserman will lead two Secret-sponsored free workshops around wage inequality at women’s co-working space The Wing.

“Products can no longer just be about how they are serving the customer; our consumer wants brands to take a stand and say something more broadly about what she is facing in her life,” said Saunders. “This campaign is a jumping-off point for a new tone, energy and viewpoint for the brand. This is a time for Secret to bolder.”