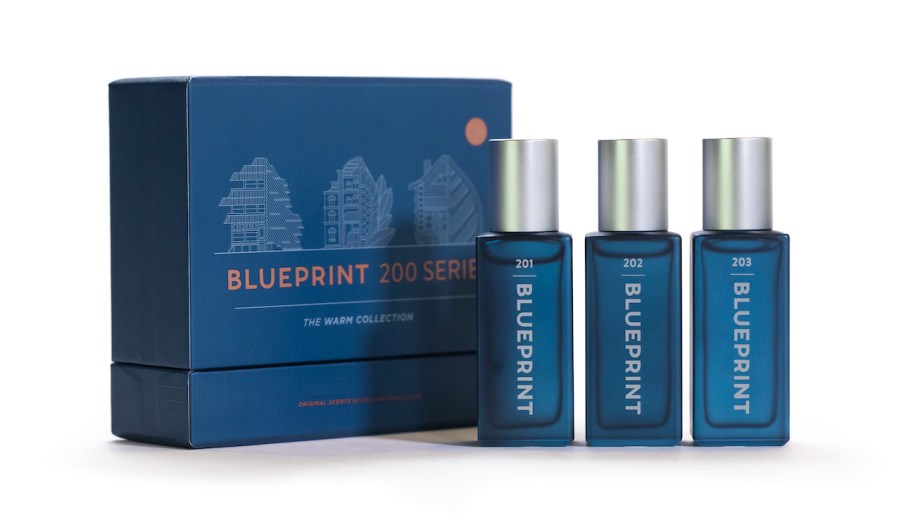 Direct-to-consumer brand Dollar Shave Club is expanding its men’s grooming reach. After launching in 2011 exclusively with razor and razor blade monthly membership kits, the company has dabbled in other product categories like its Superba line for oral care needs, launched in 2017, and a shower wash collection called Wanderer, in 2016. On November 6, Dollar Shave Club, which was recently acquired by Unilever for $1 billion, moves into fragrance.

Blueprint, a fine fragrance collection of six scents, available only at DollarShaveClub.com was the obvious next iteration for DSC, said founder and CEO Michael Dubin. “We are always striving to check off everything guys need in their bathrooms to prepare for their day. Fragrance was the next phase of that,” he said.

Rather than relying on one single fragrance, Dubin found that 76 percent of its over 4 million members have more than two colognes and 86 percent of members use different colognes for different occasions. Thus, Dubin and his team worked with fragrance developer Ann Gottlieb, who previously created signature Calvin Klein scents CK1, Eternity and Obsession, on a selection of “Warm” and “Fresh” scents — three for each range — each priced $50. “Men are willing to pay a premium for a prestige or fine fragrance, but they really don’t have to here,” said Gottlieb. “What we are offering is a premium experience at an affordable price.” For comparison’s sake, Chanel’s Bleu De Chanel Eau de Parfum starts at $95 and goes up to $155 (depending on size), and Dior’s Sauvage ranges in price from $77 to $145.

It makes sense that Dollar Shave Club, which captured about 8 percent of the $2.8 billion men’s shaving market in 2017, is attempting to tackle fragrance in its latest efforts. According to market research firm Euromonitor International, the premium men’s fragrances sector had a retail sales value of nearly $1.6 billion in 2017 and is expected to grow by about 10 percent to $1.7 billion by 2022.

Diversification, too, seems to be on trend for other direct-to-consumer shaving companies. Competitor Harry’s, which launched two years after DSC in 2013 and holds about the 2 percent of the men’s shaving market, recently launched its new women’s shaving brand, Flamingo, out of its accelerator Harry’s Labs.

But it’s not all about expanding its product assortment for Dollar Shave Club, according to Dubin, who calls this year the phase of “Dollar Shave Club 2.0.” To get existing DSC members excited about the Blueprint launch, the brand offered a pre-order experience that began in September. Existing customers were able to sample the six “Warm” and “Fresh” fragrances via gel pack samples in their upcoming Dollar Shave Club box before committing to buying Blueprint. However, on the samples themselves, there was a link to pre-order Blueprint making the path to purchase seamless, according to Dubin. Dollar Shave Club wouldn’t release the number of members who tried and bought from the pre-order service, but senior brand development manager Nick Virginio said that the pre-order seeding exceeded DSC’s initial goal by 400 percent.

Blueprint will also be worked into Dollar Shave Club’s full-service offering that has been in a pilot test phase since March. This new strategy, along with the pre-order sampling, is a way for the company to evolve its shipping to cater to individual members and their needs, said Dubin. Via the full-service option, DSC members are no longer locked into a fixed, monthly subscription, and the new fulfillment opportunity allows members a variety of options on frequency, such as every other month or quarterly. Customers can also customize each box to get certain items within the DSC portfolio more frequently (like razors, oral care or shower products) or less (like Blueprint), based on their usage habits.

Additionally, Dollar Shave Club will be testing its first physical retail play next week via vending machines featuring trial-size versions of all DSC product. The machines will be located in ten high-traffic areas like the Mall of America in Bloomington, Minnesota; LaGuardia Airport in Queens, New York; and the Transbay Transit Center in San Francisco. Offering these DSC-branded vending machines in airports, train stations, sports stadiums and malls will give the company the chance to provide products immediately when and where customers actually need them.

“With the evolution of DSC’s business model, we are not only upping the number of products we offer, but we are also presenting our members greater personalization and service, and also flexibility and customization,” said Dubin.